A Brief History of the Ashland City Band

The Ashland City Band traces it roots to 1876, when the Ashland Brass Band came into being. Its influence to the musical life of Ashland appears as part of an article in the April 14, 1877 issue of the Ashland Tidings. The article, about a musical program given at the Ashland Academy, ends with, “We cannot omit to mention the Ashland Brass Band whose valuable services were tendered without charge and enlivened the occasion with many pieces of music.”

There appear to be conflicting reports as to the date of the formation of this band, as there is an article in the September 26, 1879, edition of the Ashland Daily Tidings that reports, “There has been subscribed $173.50 for the formation of the Ashland Brass Band.” Yet, in an article dated July 18, 1879, just two months prior to the September 26th article, the Ashland Daily Tidings reports that “there is a movement on foot to raise money for the purchase of instruments for a brass band in Ashland . . . It is understood that the proceeds of the entertainments will be invested in instruments which are to be the property of the town band, and cannot be taken away from the town.” It is unknown whether or not this was a new brass band proposal, or a continuation of the band cited in the April 14, 1877, article. Obviously a band was formed as evidenced by the photograph below of the band riding on the stagecoach. The name of the band can just barely be seen on the bass drum. This photograph is undated, however a handwritten caption says, “On East Main Street toward the park.” The brick building behind the stage coach would be close to present-day City Hall. 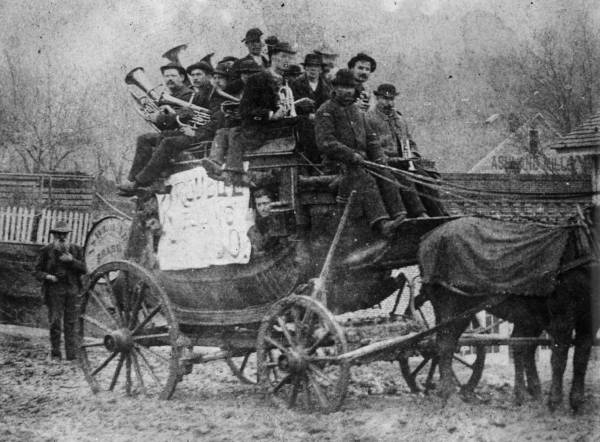 A band identified simply as the “Ashland Band” via a handwritten note on the back of the next photograph indicates that it was taken between 1880 and 1895. This band, also known as the Helman Red Suit Band, was widely recognized for its musical ability soon after 1890 when Otis Helman was named director. Military uniforms of deep red with gold braid added color to the band that, by this time, numbered about 20 members. During the early years of the band, concerts were given from a small building located on the hill near the Chautauqua Tabernacle. A small amount of money from the city budget was used to pay the director a token fee, and from the group of musicians many smaller groups were organized and in constant demand for parties, holiday events and dances. Otis Helman also had a dance band that played about 20 years. Otis Helman’s first wife played the piano, and his brother, Butler Helman, played the violin. All of his brothers played in the band. The names of the players in the photograph are listed on the verso of the photograph. The Southern Oregon Historical Society’s Research Library has two separate copies of this photograph, each with the names listed in a different hand. Between the two photos there is some discrepancy as to who is who, so the list below this photograph is the best that can be derived from comparing the two. 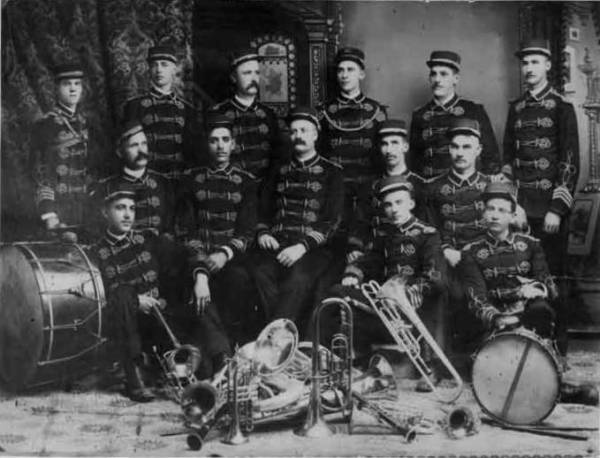 Of interesting note, a separate portrait photograph taken of Grant Helman with a baritone horn shows that he had only one arm – his left.

A photograph showing a band known as the “Woodmen of the World Band” in Ashland, Oregon, is dated April 30, 1905. According to their website, Woodmen of the World is the largest fraternal benefit society with open membership in the United States. Woodmen was founded in Omaha, Nebraska, by Joseph Cullen Root on June 6, 1890. From its humble beginnings, Woodmen has grown into a financial services organization large enough to offer security, but small enough to still care about each individual member. Spanning three centuries, Woodmen has evolved into a modern financial services organization, offering life and health insurance, annuities, investments and home mortgages. Today, Woodmen is one of the largest fraternal benefit societies with more than 810,000 members who belong to more than 2,000 lodges across the United States and conduct volunteer projects that benefit individuals, families and communities.

Several of the band members in this photograph appear in other photographs of other bands in the area (most notably, William Loomis, grandfather of Virginia Westerfield who was a member of the Ashland City Band for over 60 years until her death in early 2007).This band was most likely not a precursor of the present-day Ashland City Band, but it does show a band that has moved away from the more popular brass band of earlier times by utilizing clarinets and saxophones along with the usual brass instruments. It most likely existed concurrently with other bands in the area at this time. 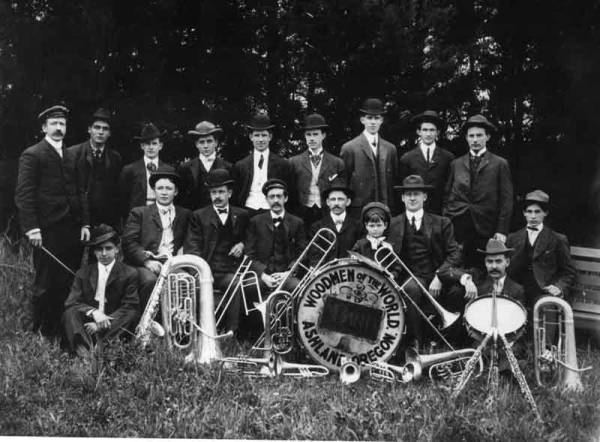 According to Margaret Hindle Hazen and Robert M. Hazen, in their book, The Music Men, An Illustrated History of Brass Bands in America, 1800-1920, “Almost every town and village of a few hundred population or more had its band of ten or twenty musicians who performed for almost all public gatherings: concerts, parades, dances, picnics, weddings, funerals. In most communities the town band provided the only instrumental concert music other than church and parlor music.” Below is a 1908 photograph of the Ashland Band marching in a parade near the plaza. 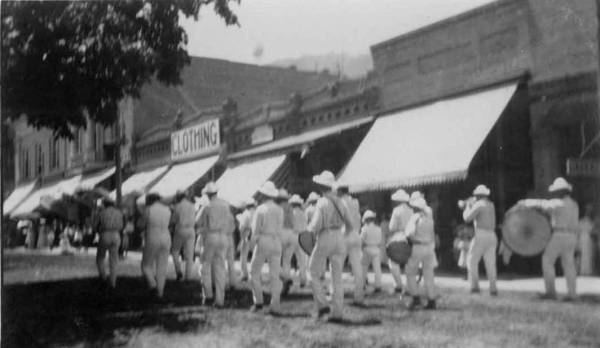 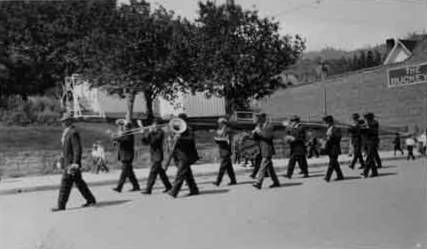 The following photograph of the Ashland Concert Band marching in a 1915 parade lists the members of the band, at least as many as the contributor could remember. 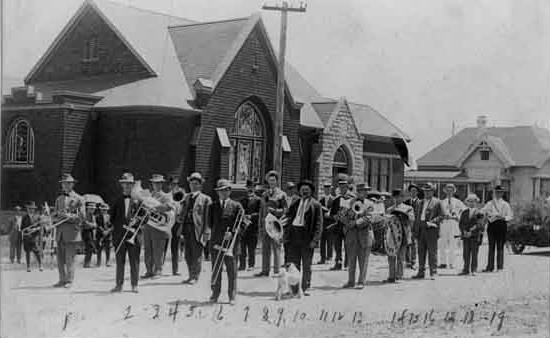 Later photographs of the band show that the Fourth of July parade route was in the opposite direction from what it has been since the 1960’s (est. date). In the photo below, the parade is clearly shown marching from the plaza towards the college (currently the parade forms at Triangle Park near the Southern Oregon University campus, and marches northwest towards the plaza). 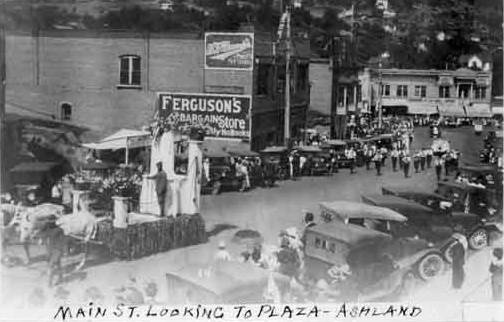 The band was still marching from the plaza towards the college in the 1940s. Although there is no date listed on the next photograph, the cars, dress, and theatre marquee seem to suggest early to mid-1940s (the movie was made in 1939). 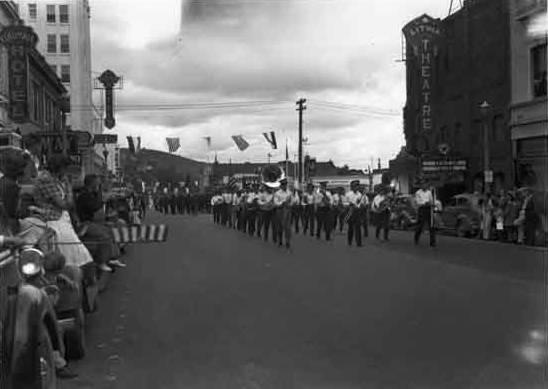 The next photograph, clearly identifying the band as the “City Band” of Ashland, Oregon, is dated 1908; however, other copies of the same photograph indicate a date of 1906. 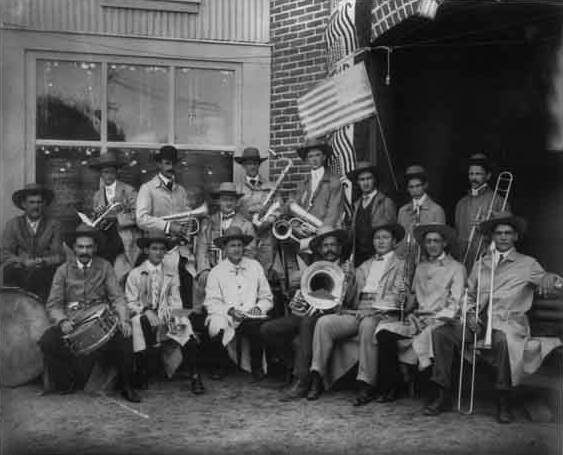 On the verso of the photo is written the following information:

The band has performed concerts in Lithia Park, designed by John McLaren, designer of Golden Gate Park in San Francisco. For many years the band performed in the park’s small band gazebo, entry to which was through a trap door in the floor. Long time band member Virginia Westerfield (d. 2007) told of a time when she was a little bit late for the start of the concert only to find that the conductor had slammed the trap door shut denying her admittance. Below is a photograph of the band at that venue. 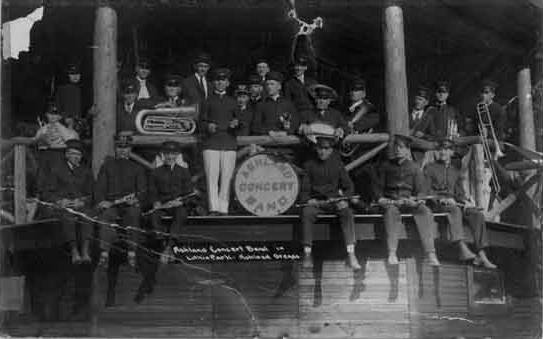 Virginia Westerfield, long time clarinetist with the Ashland City Band, had long ties with the band, as her grandfather, Will Loomis, also played in the band. He was a percussionist, most often photographed holding a snare drum. He is pictured in the next photograph seated to the right of the bass drum. Of note: this band shell is not the one in Lithia Park, but is, possibly, in Portland, Oregon. The inscription on the back of the photograph indicates that this photograph was taken at the Rose Parade. Although no location is cited, Portland is famous for its annual Rose Parade, and it is possible that the band appeared there. 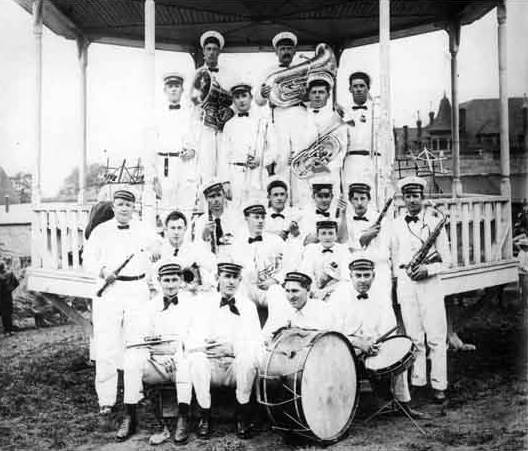 Close examination of this photograph reveals that someone has written numbers on the hats of each person in the photograph. On the verso of this photo is the following listing of names:

Over the years the band’s name, size, faces, and instrumentation have changed, as has its mode of support. In 1890 the band numbered about twenty musicians. By 1961 the band was up to about sixty-five members and in the 1990’s had reached into the mid eighties. In 1938 the city of Ashland approved a .6-mil levy to support the band. At the time of this writing (2007) the band has three members who have performed with the ensemble in excess of fifty years each.

The band’s performance venue has seen some changes as well. Early concerts were given at a small building located on the hill near the Chautauqua Tabernacle. The designer of San Francisco’s Golden Gate Park, John McLaren, received a commission in 1915 to draw up plans for Lithia Park and they included an octagonal gazebo-style bandstand. By the following year the band was utilizing the bandstand and continued to do so until 1949 when the Butler Band Shell was built and dedicated. The band continues to use the Butler Band Shell to this day, attracting very large crowds for its concerts.